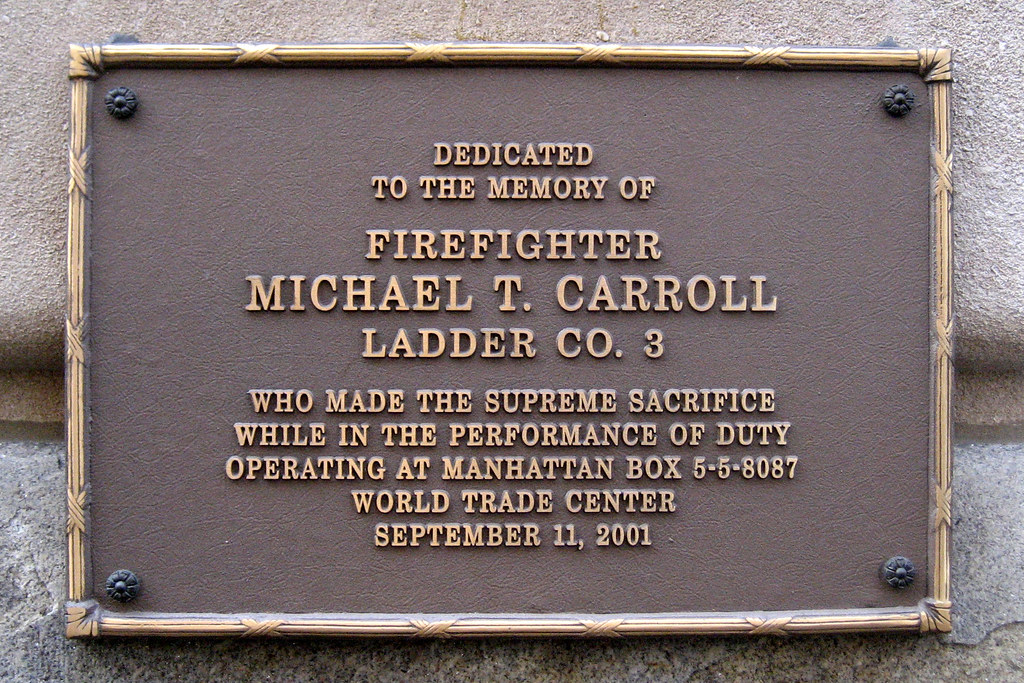 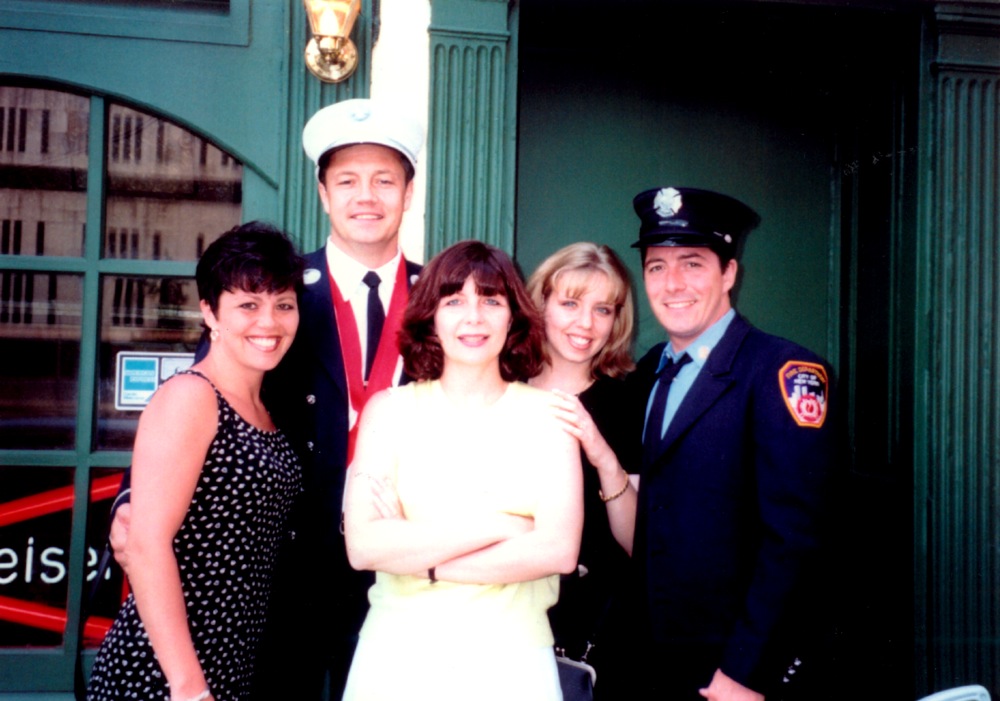 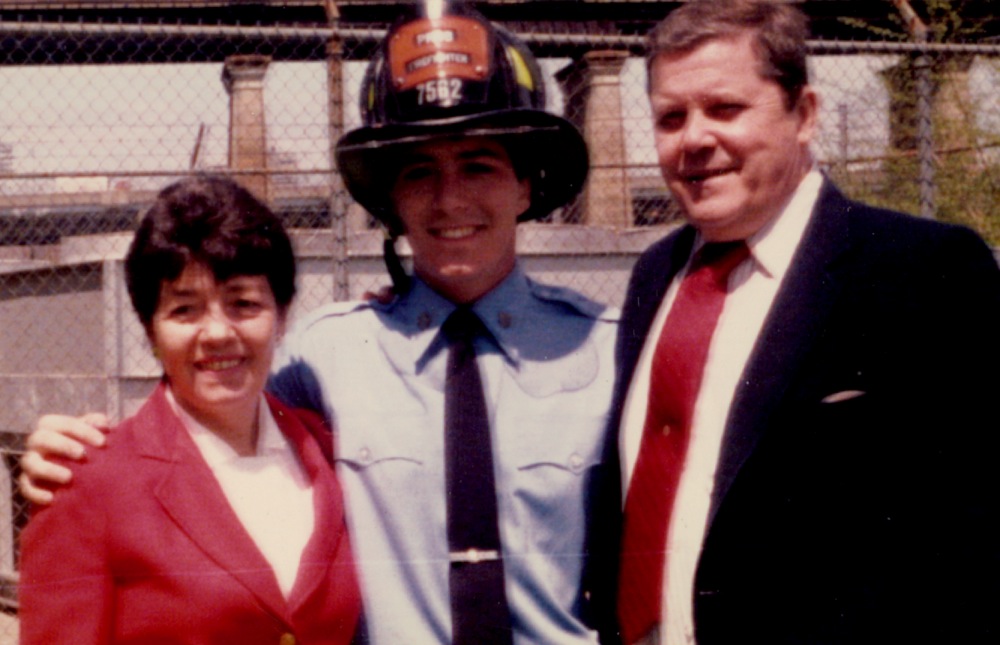 We'll Never Get Over it, Nor Should We 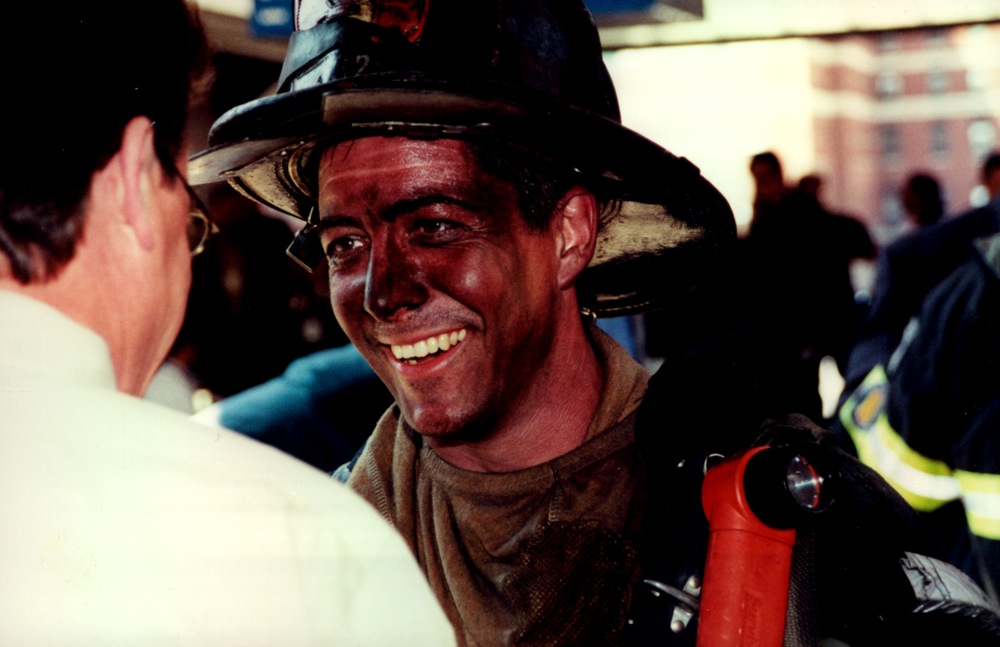 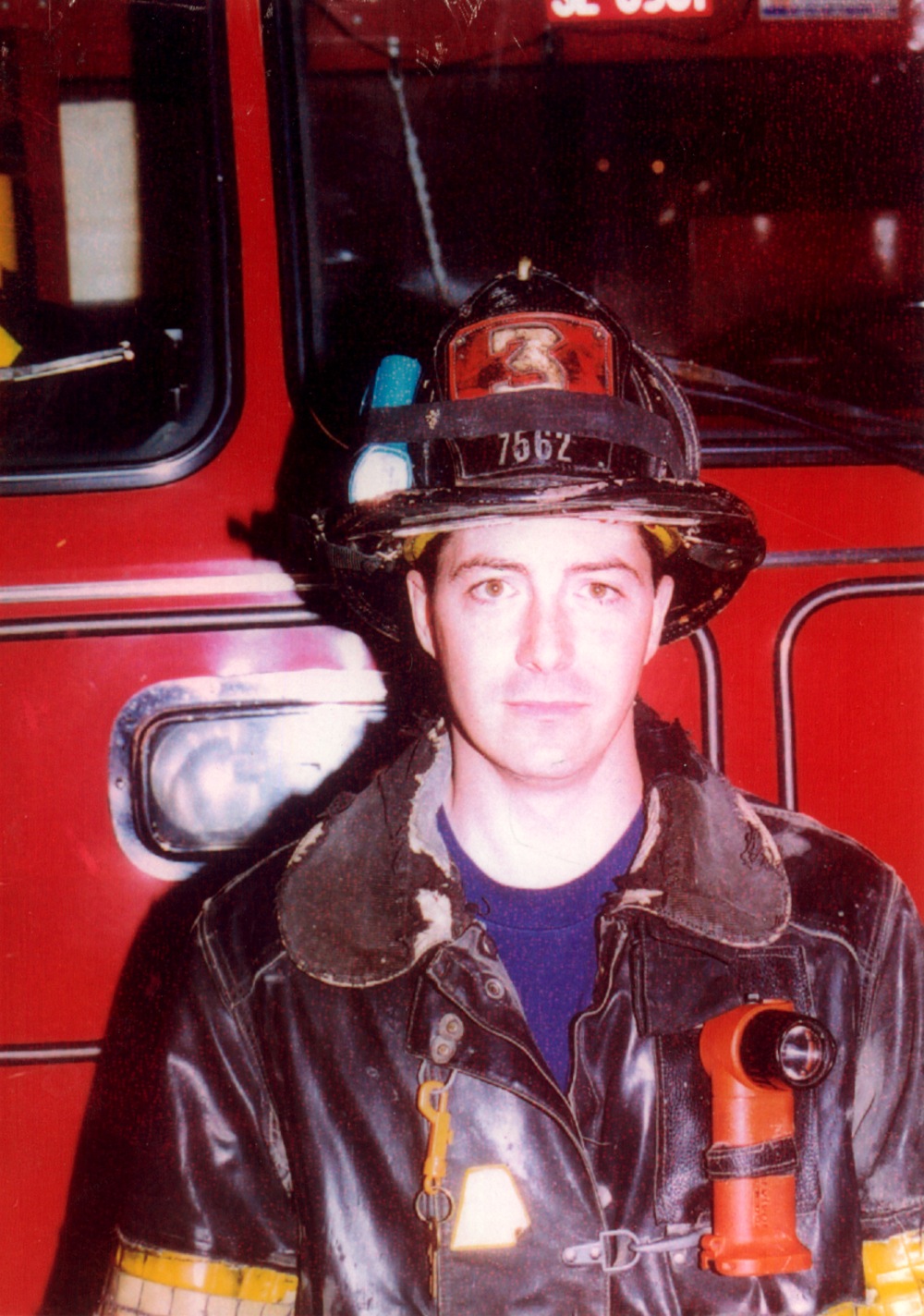 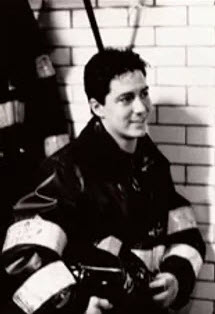 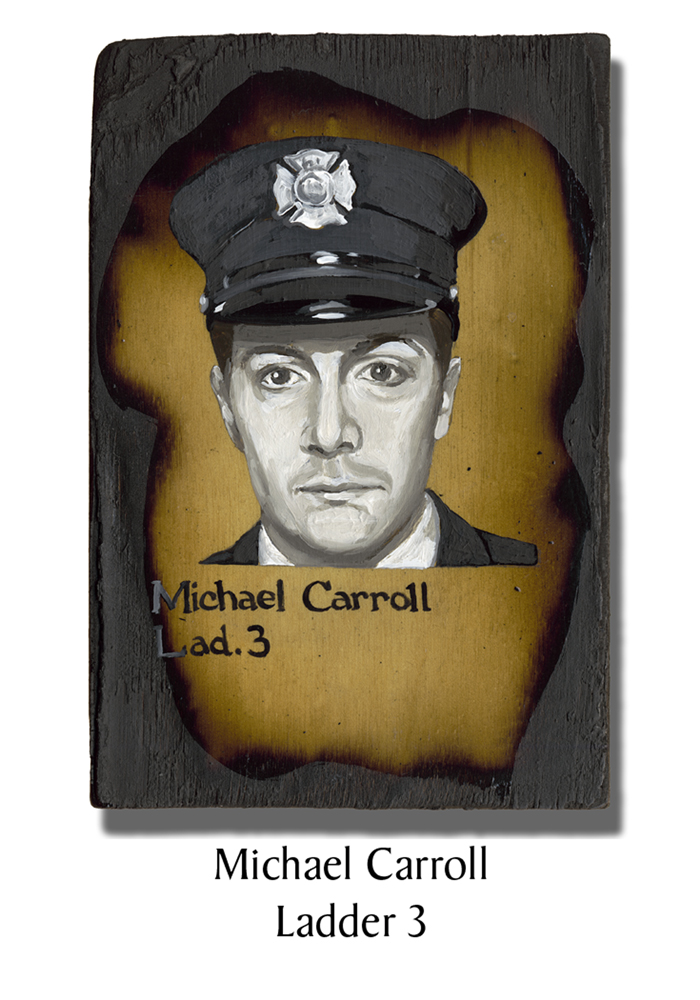 In Loving Memory of

Eulogy for Michael, by his Brother Billy Carroll:

​When Mike was a small kid, and I do mean small, the time came for him to play little league baseball. So Dad brought him down to the ball field under the Fifty Ninth Street Bridge and got him started. You had to see him in his uniform. He was really tiny. When he came to the plate, he looked like a batting helmet with feet. As the pitcher rocketed fastballs by him, he just stood there, frozen. Because of his tiny strike zone, Mike was usually guaranteed a walk. Two or three games had gone by and mike had not taken the bat off his shoulder. This was just fine with his coach, because it was like having an automatic base runner every time Mike got up - a walk was as good as a hit and all that.

​But things were not sitting right with Dad. He had brought his boy down to play ball, and that’s what he was going to do. This one time, as Mike was getting ready for his next at bat, he looked up, and there was Dad looking right back at him. In a calm but stern voice, Dad said “swing the bat”. Now we all like to think we make our own choices in life, but when you were a Carroll kid growing up and dad told you to do something, there was no choice, you’re fate was sealed, and you did what you were told. But that was all my brother needed to hear. “Swing the bat”. The rest, as you all know, is history. Mike was never afraid to swing the bat again and he went on to become a great ballplayer and athlete. And whether it was baseball, football, basketball or any other sport you could think of (except maybe soccer), Mike was always one of the best in the neighborhood.

That’s a story that my Mom has told around the dinner table more than a couple of times throughout the years. It’s a good story and we always smile and laugh about it. But for some reason, that story kept popping up in my head these last few weeks. And then it finally hit me. This really wasn’t a story about a little kid who was afraid to swing the bat. This was a story about a defining moment in a great man’s life.

You see, even though Mike was so young at the time, I think he was able to realize that height and weight had nothing to do with what you were going to make of yourself in life. He was able to figure out that it was about determination. Inner strength. Moral fortitude. Quiet self confidence. It was about heart. It was about all the ingredients of the makings of a hero.

​From that day long ago on the ball field to the last day of Mike’s life, he excelled at everything he did. Athletic achievements, academic excellence through grammar school, La Salle High School, a scholarship to Manhattan College. A distinguished career in the F.D.N.Y., and even running his own business so he could help make ends meet and give his family a little extra. All because he was not afraid to “swing the bat”. Not afraid to take a chance on succeeding, and never worrying about the possibility of failure. Mike put his heart into everything he did.

​The dictionary defines the word “hero” as any man noted for feats of courage- or nobility of purpose- especially one who has risked or sacrificed his life for others.

Any one of those three qualities would make a man a hero – feats of courage, nobility of purpose one who has risked or sacrificed his life. Wow. Mike was three for three.

When it was decided that I would speak today, I was going to begin by saying that my secret was out, because I had always known Mike was a hero. But it didn’t take me long to find out that everyone already knew. His “brothers” in Ladder Three and those men of the surrounding units knew by working alongside him through the years and watching first hand his actions on the fire ground as well as in the firehouse. I never had the pleasure of working a fire with Mike, but I have been told he had a combination of guts, great instinct and undeniable determination. In the F.D.N.Y., one does not need to hold rank to be a leader. As a fireman, Mike was a natural born leader. A man that was never afraid to take the bull by the horns.

​But to the rest of us, I believe it was Mike’s nobility of purpose that we all respected, admired and loved him for the most. To his friends he was someone who was as loyal as they came, someone who was always there when the chips were down. A man who would never back away from anything he believed in, and would stand behind them when they needed to stand for something they believed in. That surely was Mike.

​To my sisters Nancy and Eileen and myself, he was a guy who was quick to smile, and say hi, and shake hands, and even quicker to share a funny story. Usually, at our expense.

To us, he was the straw that stirred the drink, the glue that held us together. It always fascinated me that even though Mike was the youngest, it was him we could seek out when we needed advice on a problem we might be having. I often joked that he was my older brother in disguise. Simple family values were his code and his passion, and he loved being a part of a loving family, you could just tell. Family always came first to Mike. He would sooner turn down tickets to the Super Bowl than miss one of the kid’s birthday parties.

To the guys he played ball with, he was a great team mate, an intense competitor, one that could be depended upon for a clutch hit or a great play in the field. And when the game was over, win or lose, he was all smiles again, and “let’s go get a beer”.

His neighbors knew him as this real happy, friendly guy. But man was he busy. One minute he was racing through town buying a couch, or a washing machine, and the next he was hanging off the back of his house, laying shingles. But when it came time to play with the kids, time stood still. He never seemed to rush when it came to that. Whether it was in his own backyard or on the Asphalt Green in Yorkville, he took time for all the kids, not just his own.

To Jimmy, Chris and Donna, the attachment of “in law” just doesn’t seem to fit. He was their brother, plain and simple.

To all the nephews and nieces, Mike was always the first grown up at the beach to start the whiffle ball game, or football, or make a sandcastle. He even carried a shovel in his car to build those sandcastles.

You could always tell how proud mom and Dad were of Mike as they watched in admiration and love as he made his way through life, always tackling life’s challenges one after the other without ever losing stride. And there were so many accomplishments. And he had the knack for making them look easy. But they weren’t. Mike worked hard on the inside. Determination, inner strength, moral fortitude, self confidence.

Mom will tell you what a good kid Mike was growing up. And he was. Respectful of his elders and neighbors, holding the door and saying please and thank you by day. Poor Mom. Little did she know by night we were on the terrace firing bottle rockets and heaving snowballs at anyone who dared try to pass eighty fifth and first! Oh well.

There are so many memories that we Carroll’s share, everything from St. Patrick’s Day to vacations at the beach to marathon day parties and all the holidays and birthdays in between, and there was Mike right smack in the middle of all of them, clowning around and making life fun for everyone. That was a special gift he had.

If all that I have told you has not given you an idea of who my brother was, let me tell you about a girl named Nancy and a boy named Mike and two kids named Brendan and Olivia.

From the first day he laid eyes on her he adored her. And it wasn’t long before adoration turned into love. They were teenage sweethearts and they were inseparable. Everyone knew that one day they would marry, and so they did.

For Mike, the sun rose and set on his Nancy, and they had such a happy life together. Maybe the most special thing about them was that they loved spending time together. When most people were winding down from a long day, turning on the T.V. to relax, they were turning it off, so they could share with each other the day’s events.

Just when life could not get any better, and we thought we had seen the best Mike had to offer, along came Brendan and Olivia. Words really can’t describe what it was like to see Mike with those kids. Pure love is the closest I can come. As busy as he was, there was always time for his children. If you ever wanted to see a little bit of heaven on earth, all you had to do was watch Mike horsing around with Brendan, throwing him grounders or hitting him pop flies. Their game always ended with a hug. Or watched the way he cuddled with Olivia and played little girl games with her. Their games always ended with a hug. My, how he loved those kids.

Heavenly father, open your arms and welcome our Michael. It was the goodness in his heart that made this man great. God speed my brother, my friend, my hero​.